All images from Pixabay/Pexels unless otherwise stated. Book cover images from Chapeltown Books and Bridge House Publishing. Screenshots taken by me, Allison Symes.

Hope you have had a good week. Am looking forward to the Association of Christian Writers Golden Jubilee weekend at the end of next week. I’ll be running my flash fiction workshop at that. Good to have some gloriously sunny weather in my part of the UK. The dog and I have been making the most of it!

I’m pleased to share Reading, Rhythms and Resolutions in Fiction for Chandler’s Ford Today this week. Must admit I’m enjoying writing the In Fiction series. Only one more tricky letter to think about – X! Wish me luck!

In this week’s post I look at the reasons why writers should read widely. It’s something writers are often told to do but here I look at specific reasons why it is such a good idea. I also look at why making writer friends also helps with your reading “diet” – doing so myself has done wonders for mine!

I go on to look at rhythms in stories. Now these can vary depending on genre. Crime ones for example tend to have a fast rhythm to them, a reflective piece has a slower one, but all have to follow an internal rhythm we as readers subconsciously pick up on.

Occasionally I have read a story which hasn’t felt right to me and on looking back at it, this is because the rhythm of the story is wrong for the type of story that it is. Something feels out of kilter and it is nearly always the rhythm.

As for the resolution side of things, again a story has to have a resolution which works for it. Sounds obvious, doesn’t it? But it doesn’t always work out in practice. A resolution shouldn’t be based on chance. It should also be apt to the character and type of story. My post looks at this aspect of things too. Hope you enjoy the post.

Reading, Rhythms, and Resolutions in Fiction

Reading, Rhythms, and Resolutions In Fiction is my Chandler’s Ford Today post for this week – link up tomorrow. See above.

I’ll be looking at why reading is so important for a writer, how stories should have a natural rhythm to them (though the rhythm can vary on genre – crime fiction will always be faster paced than reflective tales, say), and why resolutions should tie in with and make sense for your character and setting.

Just over a week to go to the Association of Christian Writers Golden Jubilee weekend. Am so looking forward to going and catching up with people. I’ll be running my flash fiction workshop and I hope people will leave it either with a draft story completed and read out later in the day or with something for them to take home and work on further (and then submit somewhere. I would love to hear of publishing success as a result of this). Looking forward to the Swanwick Writers’ Summer School later on in the year too.

Writing Niggle Number 1890 – why is it I can never find a pen when I want one? I know I’ve got them. I’ve got loads in fact. But are they ever to hand when I need to jot something down quickly? Of course they’re not! For almost any other profession, this would be one of those things but for a writer? We’re supposed to have pens on us! 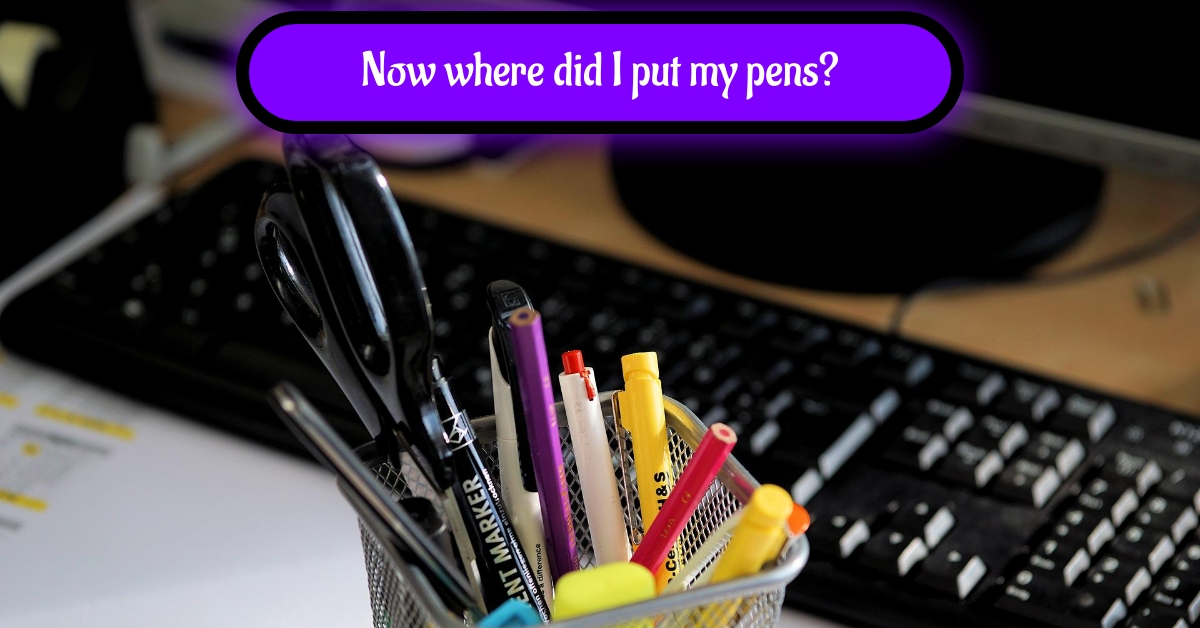 Blustery day today, more like autumn out there. Not impressed! Am grateful writing is generally done indoors.

Do you have any writing niggles? If you’ve got loads, which ones particularly bug you? Mine are:-

1. Phone going just as I am completing an edit and I lose my train of thought. Okay, I can ignore the phone, but that train of thought has been derailed and nothing is bringing that back quickly. It is as if I have to step right back to just before that wretched phone rang…

2. Manage to do that and am settling down to editing the next bit when guess what… the phone goes again. Worse, it’s one of those fake Amazon/Inland Revenue calls designed to part you from your money. I’m usually thinking unpleasant thoughts at this point. May ask one of my crime writer pals (you know who you are) to arrange something to deal with these people in their next novel so the scammers never bother anyone again. How about it, girls? You would be doing the world a service here, honestly.

3. Getting off to a slow start with my writing session, then the spark really gets going and I can’t type fast enough. Okay it’s great the spark gets going but I prefer an even pace throughout and would like that spark to turn up sooner! I’m good to go, it’s just that my brain isn’t! Have learned to accept you do just get days like this. What matters is I am writing something which can be improved at a later date but it is frustrating at the time.

Am pleased to share my latest story on Friday Flash Fiction. This one is called The Heights of Equals and is based on a random generator which came up with “pet peeves” as a theme.

I chose one pet peeve for one character and created the story from that. It is also one where I have immense sympathy with my heroine here given I am also under five feet tall. Is it a coincidence I gave my heroine the same name as myself given this information? Err.. No! Hope you enjoy it.

Really enjoyed the Association of Christian Writers’ Flash Group meeting on Zoom last night. I set everyone a challenge too which I will also have a go at. Groups like this are great for encouraging you to write (a) more – if I do the challenge, I will have an extra story to my credit and (b) encourage people to write something short.

The nice thing with flash is you have a market now for small pieces. If time is tight as it so often is for most of us, five minutes is enough to draft something towards a complete flash story. You’ve then got something to carry on with the next time you’ve got five minutes spare. You can build up a story like that.

I was chatting about writing niggles over on my Facebook author page and one that bugs me from time to time over flash fiction writing is when I’ve got an idea for a 100-word story and a competition/market to sent it to, but try as I might, the tale will end up at 150 words or so. I know now to leave it as it is and write something else for the 100 word market but it can be frustrating at times!

Having said that, this happens and it means I end up writing two stories so you could argue it increases my productivity.

I’ve used minor fairytale characters in stories. Indeed my first published story in print was about the youngest stepsister to Cinderella and appeared in Bridge House Publishing’s Alternative Renditions anthology back in 2009. It is great fun to write fairytales from the viewpoint of other characters.

Minor characters should have a vital role to play in your story, even though they’re not on the “stage” for long. This could be anything from providing key information to unwittingly getting in the way and having to be “removed” in some way so the lead character can get on with the job they’re meant to do. It should be clear to the reader why they’re in the story. The story should feel as if something was missing if they weren’t in it.

A good way of flagging up whether a character is important to a story is to name them. Unnamed characters are generally seen as “walk-ons”.

In longer works, minor characters can have sub-plots of their own which should add something to the overall plot. Think about The Lord of the Rings. The lead story there is Frodo’s quest to destroy the Ring of Power but there are many sub-plots including the role of Pippin and Merry. They’re not major in their own right (not compared with Frodo and Sam anyway) but their story adds something vital to the overall depth of that book.

Could your minor characters do the same for your story?

Always ask yourself what their role is to ensure there really is a place for them in the tale. 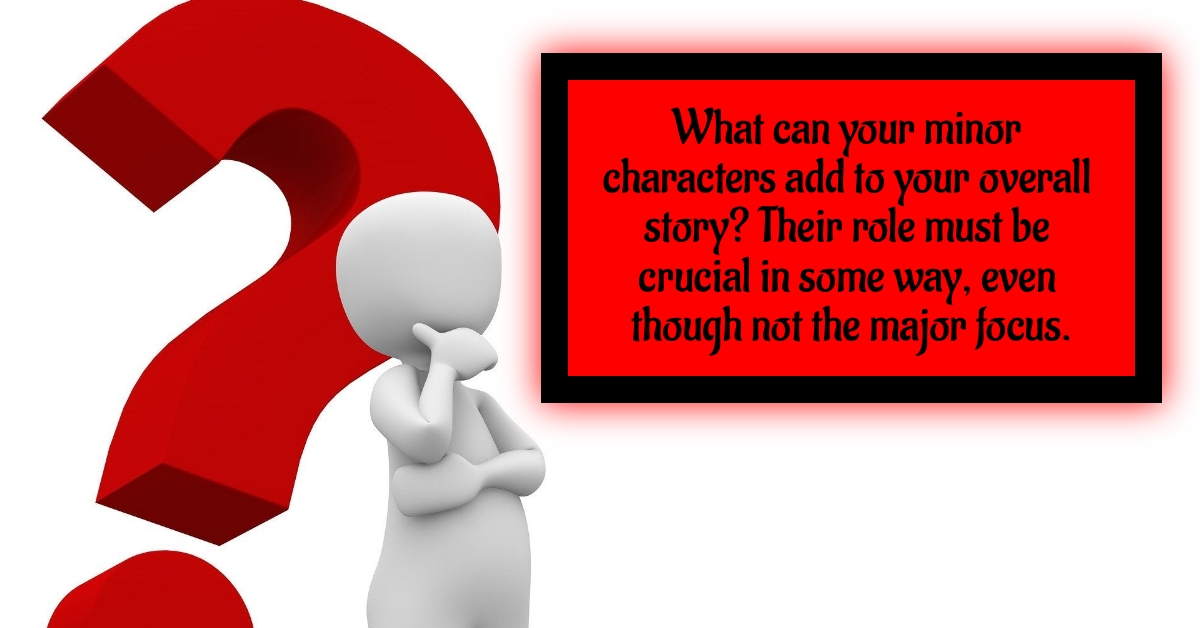 This World and Others – Layers

What is the most important thing about your fictional world and how does that impact on your characters?

What layers are there to your characters themselves? What hidden depths do they have (or are they strictly shallow)?

I focus on characters for my stories so I want to know what drives those people. I need to know what their major trait is as that will give me a rough picture of what they are like.

Minor traits tend to back up the major one. For example, if a character is brave, are they also honest, direct in their speech and actions etc? Answering those questions helps me build up a composite picture of my characters and then I get on with the draft.

Working out what you need to know, what layers your world/characters needs to have for you to write convincingly about them, pays off. It can can save you a lot of grief in the editing. 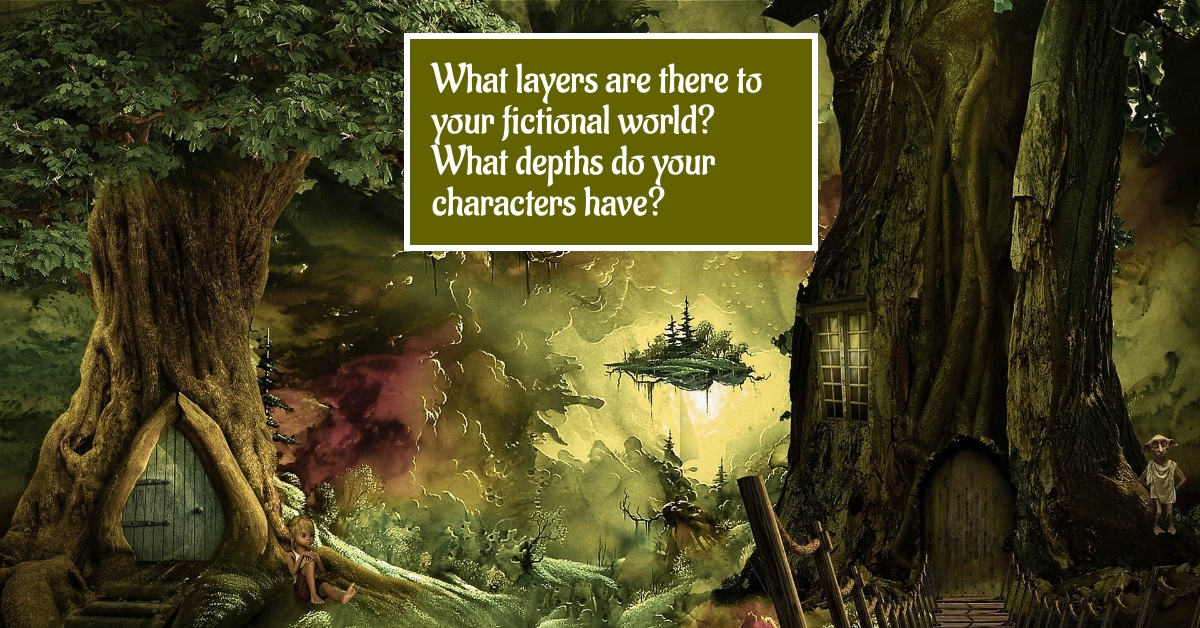 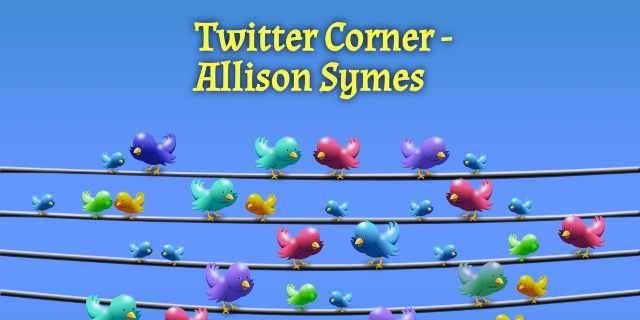 Reading, Rhythms, and Resolutions in Fiction https://t.co/MdxrvR6NrO I share specific reasons why writers should read widely. When a tale hasn’t felt right, it's often due to the rhythm being "out" for story type. Resolutions, not based on chance, must be apt to the character.

The Heights of Equals, by Allison Symes – Friday Flash Fiction https://t.co/iS8XNJZvHZ The idea for The Heights of Equals comes from a random generator which came up with “pet peeves” as a theme. I chose one peeve for one character and created the story. Hope you like it. pic.twitter.com/PPFa84XYX7

https://platform.twitter.com/widgets.js
Processing…
Success! You're on the list.
Whoops! There was an error and we couldn't process your subscription. Please reload the page and try again.